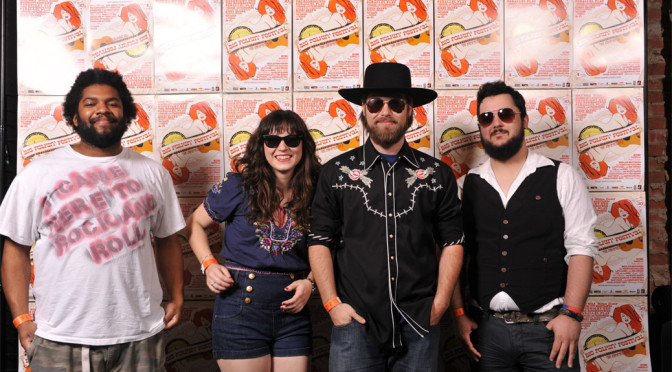 It’s hard to find a good album of folk songs. Unfortunately these kind of songs are never heard of for a mainstream music listener like myself.

Troublemaker is the Denton, Texas band’s debut album, featuring 10 songs with great guitar and banjo work and an interesting set of lyrics that give each song a narrative of their own. Kicking off with “Heartsick Man”, whose lyrics belie the song’s lively, upbeat rhythm (‘The hole I’m digging ain’t got room for two’), one can tell the rest of the album is something to look forward to. While a folk rock band, Troublemaker has them incorporating other genres into their music that give it a very unique listening experience, while also infusing a storytelling edge to the whole album thanks to both Kim (she’s also a writer and editor “with a background in drama and poetry”) and lead singer and lead banjoist/guitarist Jesse Thompson, who has an interest in the American South and wrote many of the songs featured. As guitarist and background vocalist Kim Nall puts it,

“While it is true that we place a strong emphasis on storytelling, we never want to lose the defiant, slightly drunken, freewheeling quality that makes being in this band and playing these songs so much fun.”

With Jessie lending his voice to good effect, and Kim adding harmonics in the background, it does leave this reviewer mesmerized and grooving along to the eclectic mix the band has to offer in Troublemaker. Apart from “Heartsick Man”, “Not My Time” also gives a laidback feel with the slow guitar-and-banjo rhythm. “Waiting for You to Fall” is another similar song, though giving a more melancholic tone as the band sings of unrequited love. “Cloud O’er My Head” and “Cat & Bird” are far more melancholic tunes, but they really give an ambient feel with every second you spend listening – in the former, Jesse’s lilting voice is accompanied by an equally dreamy instrumental that could make you drift away (and wonder if that cloud really wants him dead); in the latter, it’s a different take of melancholia as Kim injects a sense of foreboding that runs a shiver down your spine.

Overall, Troublemaker is a good take on alternative folk rock and an extra reason for those first-time folk music listeners to go out there and listen to more folk songs. Given that folk music now comes in a wide range of music from its humble roots, Levi Cobb & the Big Smoke is one of many talented gems that really are worth the time supporting.