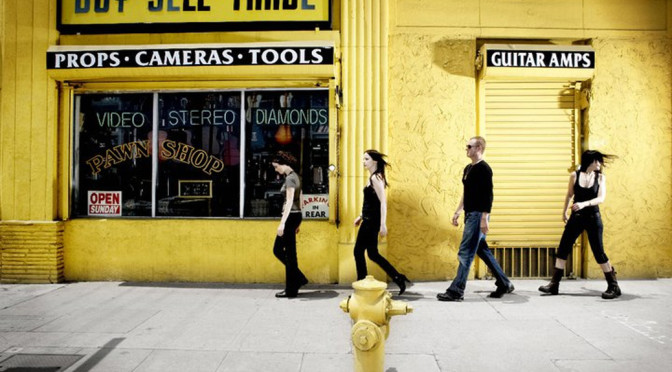 Trophy Girl Part 2, the latest EP from the sexy LA based, alt-rock duo Saucy Monky dropped on the 25th of June.

Featuring the seductive anthem Do I Have Your Attention, followed by the heart-wrenching Sleepwalking and the tipsy sorority girl single My Girlfriend is Alcohol. Each of these tracks showcase the incredible diversity this band has to offer, together with their trademark attitude and powerful vocals.

Cynthia Catania of  Saucy Monky was also kind enough to shine some light on their latest release.

1) What inspired this particular EP? How did you decide on the name Trophy Girl?

We had a collection of songs that came together when we were working with our previous drummer, Megan Jane.  We were very excited to experiment with a particular set of sounds, instruments and amps to bring this body of work to life.  I had just moved into our former drummers (Karen Teperberg) house, which had a separate studio space (Karen’s a fantastic drummer. She returned to her native Israel).

I was thrilled to have my own, bonafide studio space, where I could record everything, including live drums.

Trophy Girl is a lyric in our song “Awkward.”  I thought it would be a perfect title for the album.  It’s such a layered phrase.  We asked around within the band, and also with our extended team, and everyone seemed to like it.

2) Is there a reason why Trophy Girl was broken into 2 parts?

It’s actually a 3-part collection.  Lastly we will release the full length at years end.  This part will have 4 new tracks, and all subsequent 6 tracks, which were released on Parts 1 & 2.  For Annmarie and me, it was a way to keep things interesting for ourselves, keep up with the new music market – which is a singles market, and also not delay releasing new product, as I’ve been working on the album (as a whole) in dribs and drabs.  We loved the idea of staggering, and keeping things fresh for our audience.

3) What were some of the struggles involved in the production of this EP?

In an effort to “serve the songs” we first recorded our live arrangements.  From that point, I whittled down the instrumentation to make the recordings as sparse and supportive as possible.  There’s also lots of experimenting that goes into finding the right guitar sounds, drum sounds, FX.  Then there’s the singing.

We always try to achieve a balance between telling the story and being emotive and sincere.  All this takes (a lot of) time.

4) And what do you hope to achieve with this new release?

We’d like the quality of these EP’s to improve our Pandora station!  We’d love a few major motion film placements.  We’d love to make new fans, based on the appreciation of this music.  That’s all one can really hope for – connection.

For more details, you can check them out at www.saucymonky.com