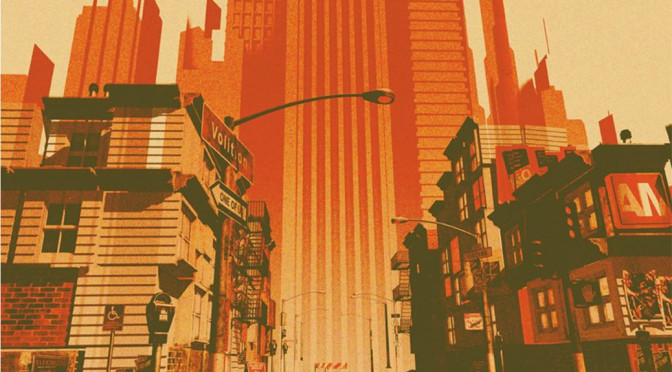 “This Time” by Thought Beneath Film is the final track of their debut album Cartographers. Today, vocalist Brent Wirth walks us through his creative process.

The process of writing a song (or an album for that matter) is often non-linear. Fragments of melodies, lyrics and ideas can often drift around one’s consciousness for weeks, months, even years in some cases before a purpose or place is found for them. Some may even be forever condemned to musical purgatory, never finding that purpose or place within the context of a song.
Ultimately, “This Time” is a culmination of remote fragments and ideas that had been drifting around in my mind merging together and finally finding their place to form a complete thought.
“This Time” began with the simple pentatonic melody that is featured throughout the verse sections of the song. I can’t recall the specific place or time that I stumbled upon it, but most of my creativity seems to strike in the small hours of the night when all of the filters in my brain finally shut down. Knowing this trend, I often force myself to stay awake far beyond the point that my body wants to just in case a great melody or idea presents itself. Unfortunately, they don’t always come and it’s easy to become discouraged. Given this simple fact, having patience and faith in the notion that another great idea will eventually strike is vital to being successful as a songwriter.
I recently read The Pinkerton Diaries by Weezer’s frontman Rivers Cuomo and I think he really epitomized the process with an analogy he made in one of the essays featured in this book. He eloquently compares being a songwriter to being a hunter:

A more successful approach is stealth. Farmer’s cats are known to shut their eyes, believing that as they can’t see, neither can they be seen, stalking the cow’s milk pail. Every day I try this. I casually enter the garage, stroll as if without purpose in the direction of my guitar, and at the last moment, pounce, and strum furiously, and sing and hope I’ve caught a tune unawares. Most often they’ve seen me coming, and fly off laughing. But not always, and this is the reason I keep trying. (The Pinkerton Diaries, p. 106) Although I felt very strongly about the melody, I didn’t really have a clear sense of which direction to take it in. So, the melody remained dormant in my mind for months. The funny thing about songwriting is that it’s not always a melodic idea, rhythmic structure or harmonic progression that illuminates a path for a potential song. Sometimes, it can be vague, abstract and disparate ideas randomly merging together in your mind. This notion was definitely true in the case of “This Time”.
I remember experimenting with an EBow (a hand-held electronic device for playing electric guitar in which the strings are moved by the electromagnetic field created by the device, producing a sound that is reminiscent of bowed orchestral strings) one day and having what I thought was an ingenious idea at the time: composing a piece for an EBowed guitar quartet – kind of like a futuristic version of a traditional string quartet. I quickly banged out and recorded a few measures of a four-part arrangement in G flat major (one of my go to keys for one reason or another) for EBowed guitars.

The sound was interesting, but not interesting enough to appease my appetite for sonic novelty at the time.

The lingering hunger pains inevitably led to the crazy notion to digitally reverse everything I had just recorded to completely change the attack and dynamic envelopes of the sound. Finally! The sound that I was looking for! The only issue was that, by reversing everything, the melody and harmonic progression were backwards and no longer sounded coherent (this very recording was actually added to the end of “This Time” and serves as the song’s outro). This forced me to re-recording everything backwards (a tedious process) with the intention of it being reversed for the sonic effect. After listening back several times, I quickly noticed the similarities between the melodies in the recording I just produced and the pentatonic melody that had been floating around in my brain for sometime. I hastily worked out a fingerstyle guitar arrangement to house the pentatonic melody that had been haunting me for all of those weeks and crudely dovetailed it to the reversed EBow music.
With minimal meddling, the parts worked together quite well. From that point, the ideas started to flow and the remaining sections of the song came together quite quickly. It was as if a bridge finally formed between a divide. I was finally able to reach the other side and complete the song. Despite being one of the band’s oldest songs, “This Time” was never featured on our early demo and EP releases. Much like the writing process behind it, it was a difficult song to record. Every section of the song is so sonically diverse that it was difficult to give any recording of the song a sense of cohesion. However, upon our most recent attempt, I think we managed to finally capture our vision of the song on record. All of our patience and faith finally paid off and “This Time” finally found its place by becoming the closing song on our debut full-length album, “Cartographers”. In my opinion, it’s the most sonically adventurous and structurally unique song on the record.