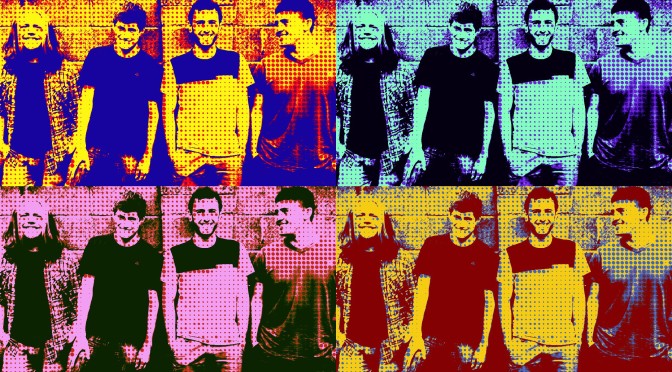 A random turn of events on Soundcloud led me to discover and befriend Jamie Mulrooney of Doppler, a small outfit from Ireland looking to spread its wings out to the wider music industry. I spoke to Jamie on one of their songs, “Don’t Be Strange”

When I’m low I find it very easy to reflect. I draw solace from the process of writing lyrics or simple melodies and piecing them together. Its like therapy. In reality I was pretty depressed at the time of writing this song and it is only now when I look back at these lyrics it seems strange to think that I felt so low. Its a track that I don’t like listening to as it bring up memories that I have no interest in revisiting.

“Don’t Be Strange” is a by product of my state of mind around that time. I ended up writing several songs on the same subject but this seems to be the most poignant. Suitably, it was written in the depth of an Irish winter which itself can be pretty depressing. The sky is always grey and there are 16 hours of total darkness and the light which shines in between is weak and has to battle through dense cloud and rain. As you can imagine most of the time is spent indoors and as I spent two thirds of my time alone because of work, it was only a matter of time before I reflected on personal experiences that had not gone the way in which i envisaged that year.

I had come out of a serious relationship and cursed the time that I felt I wasted. I was bitter and self loathing. It very hard to convey how I felt but it wasn’t good. Several of my best friends had all emigrated to Australia for years and I was one of the only ones that remained in Ireland. I felt like I missed the opportunity of a lifetime and it was now too late to join the party.

On the mornings during this time I often spent hours reflecting. I’d be looking back romantically at the past when in reality I knew that this exercise would be fruitless. That I was looking back into the past with rose tinted glasses and confusing the past with fantasy. I found it hard to let go. As usual I just wrote about what was in my mind. I wrote the lyrics over the course of 2-3 hours on a dreary morning in my kitchen. The chords changes were simple just going back and forth like a wave between a variation on A major and E Major. I then added the sound of the Ocean crashing in the background and put it very low in the mix but I think it fitted metaphorically with what the content as well as it being therapeutic, which fitted neatly into ideology that the process of making music was a release to me. I recorded it with my makeshift studio on the kitchen table and had the lions share recorded before midday.

The lyrical content was honest and I didn’t question the words as much as I usually do. I later found that lots of better writers do some of their best work first thing in the morning as they’re less self conscious about what they are saying and they haven’t had enough time to question and belittle their own subconscious.

“You need time to make you feel better,
You need sound to clear your mind,
Sat alone with your regret thinking about how you can change.
For your memories deceive you, nostalgia makes you strange.”

“You need life, surrounding us to keep you warm.
You need women to heal the cracks that you have torn
And I know you’re healing, you’re getting better everyday.
I just hope that you cope with nostalgia when you’re grieving,
Don’t Let it Make you strange.”

The chorus was slightly more uplifting. I was listening to a lot of Bill Withers at the time and Lean On Me was uplifting and honest voice to draw upon as well as Use Me and Ain’t No Sunshine. Receiving and sharing help was something that I was lucky enough to understand and I knew that in future times I would hope to be the voice of reason or be somebody to confide in. But for now I had to realise that I was the one who needed help.

The outro was a darker image that passed through my mind at my cousins funeral earlier that year. He had suffered with a long illness and I thought about his wife and children and what they were going through. I was listening to On Raglan Road a poem written by Patrick Kavanagh and performed by Luke Kelly which covers the same topics. Trying to accept loss is difficult and its just something I wanted to convey with the imagery.

“When you died in the Spring, I could have died with you too.
Throwing soil over your body, can I go down with you.
If I could be buried tomorrow would it be next to you?
I don’t want the truth.”

Many people say that they don’t care if people like their songs and its “All about the music”. I never bought into that idea at all and in fact I think that the people who say that are just lying. Getting vindication or being complimented for your music is amazing and the fact that people are listening to this song and drawing their own conclusions from it makes me feel great. It gave me a sense of purpose. And it couldn’t have came at a better time.