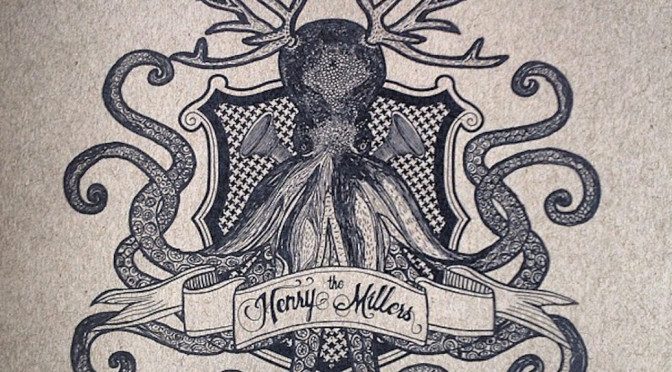 Children by New York duo The Henry Millers is the first single for their upcoming  album Posies.

Bandleader and songwriter John MacCallum writes on IndieVerse, explaining the inspiration and history behind this song.

As I was getting ready to write this I found myself reading a few other of the musician written articles on IndieVerse. I came across one such article by Kaela Sinclair and I wanted to say first and foremost how struck I was by the essay in general, but more specifically how much I related to one point in particular that she made:

“The need to create permanent and complex art can be satiated with much more ease without the stresses of a budget and timeline.”

I have found that my own desire to make music stems from a need to solve or even simply cope with a problem. Even if it is a story told in the 3rd person, the music we make always has a piece of us inside of it. It has in a way always been a source of therapy and because of that I have always wanted to make music that I personally want to listen to; music that I will enjoy and more importantly music that will help me get through the day. I don’t know what I would do if the only way I could create recorded music was based around somebody else’s ‘budget and timeline.’

It’s unfathomable. Its… without fathom. Our songs always begin with a home recording. “Children” actually began as a song called “Taxi Ride” and was one of the first songs I had recorded. I was going to school in Charleston, SC and at one point when I was back in New York, visiting home, I had an encounter with a seemingly wise old man who was driving me in his taxi. He enlightened me to the hardships of being the caretaker for a family and how difficult the task of raising children can be, especially in a big city. This rather innocuous interaction really stuck with me and eventually led me to write and record a song called Taxi Ride.

As we were finishing up Daisies and I was beginning to write and record songs that would eventually become Posies, I spent time listening to old demos to see if there could be anything to use for new music. The only song that moved me in any significant way was Taxi Ride. I felt a connection to the words and the music that was just as strong as when it had been originally recorded years earlier. I proceeded to make a new demo at home using the techniques I have learned over the years and that in conjunction with working with Max Drummey and Dan Stringer as producers is what eventually created the version of “Children” you hear now.

One thought on “SBTS – Children by The Henry Millers”