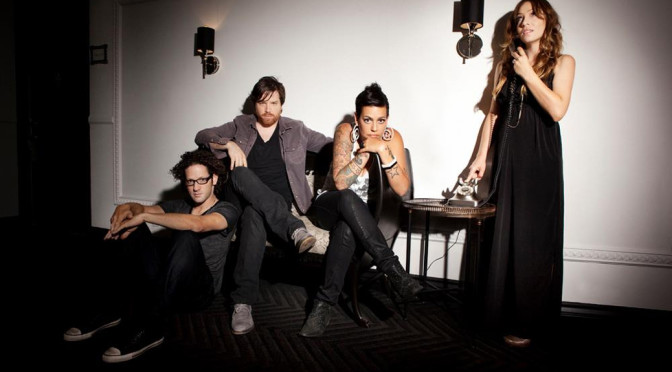 How often do you get 4 individually established songwriters, vocalist and instrumentalist in a band?

The Rescues is a blend of 4 harmonious yet distinct vocals which gives them the edge over bands and groupies out there. Dubbed as an Indie Supergroup, they are an LA based group formed in 2008 with Kyler England, Gabirel Mann, Rob Giles and Adrianne Gonzalez as band members.

This band has been steadily rising to popularity with tracks being featured in hit dramas such as One Tree Hill, Grey’s Anatomy and Private Practice. Fans of Pretty Little Liars would be thrilled to know that their track “My Heart With You” was played during a passionate kissing scene between Aria Montgomery (Lucy Hale) and Ezra Fitz (Ian Harding).

Indieverse speaks to Rob Giles about their album, struggles and their success. 1. Tell us a little bit about the band. How did the name The Rescues come about?

We are 4 very different people trying to make an interesting and honest sound.  We felt we “rescued” each other from ourselves.

2. What do you think sets The Rescues apart from the rest of the music scene?

Besides our good looks and corporate endorsements?  Nothing.  We are as average as can be. And 4-part harmony.

3. Everyone in the band seems to be a talented singer and multi-instrumentalist! How do you guys manage to make the best out of everyone’s vocals?

Not sure we do, or at least it always feels like we don’t have enough of each other.  I think we still feel the perfect Rescues song/arrangement is still out there.  But it usually falls into place fairly easily.

4. What is the inspiration behind the song You’re Not Listening?

I (Rob) was feeling quite low and gave myself a much needed pep talk. I wrote it very quickly, maybe 15 minutes

5. What motivated the band to produce ‘Blah Blah Love and War’ via the pledge project?

We wanted complete artistic control and Pledge was a very organized and motivated company.  Some of us had used them before, and it was overall a pleasant experience.  Even though we loved our Uni Republic experience, this was the logical next step.

6. How did that decision impact the band?

These days you have to find new ways to make a record, to promote it, etc.  None of it is all that fun, or comfy, but we had as much fun as we could making the project part of the experience.  In the end it was a lot of fun, a lot of headache, a lot of fun again.

7. What were some of the struggles that the band endured during the production of this album? What keeps everyone together?

Spending as much time apart seems to keep the band together!  We struggled the most with agreeing on the direction; if any one of us pulls too far in one direction, the entire ship veers off course 8. Are there any upcoming projects that the band is working on?

Oh man, Gabe is scoring Modern Family, Arrested Devlopment and Rectify among other things; Kyler just had a single with Tiesto; Adri is making art and directing, and I (Rob) and in a band with Andy Summers of The Police and we are about to release our album and tour.

9. Favorite songs from your own album? 10. Tell us something that fans don’t know about you.

We are all soviet spies from the cold war waiting for our visas to finally return us to the motherland.

11.  If you could collaborate with anybody, dead or alive. Who would it be?

12. Where do you see The Rescues 5 years from now?

I hope we can make another record or two.  It is so hard to know the future – we are all at such important crossroads right now.   Let’s hope there is more music by then. 13. Any shout outs to your fans and the readers of this blog?

If you are a new fan, please check out our records cuz we don’t suck.  If you are an old fan, thanks for the support!