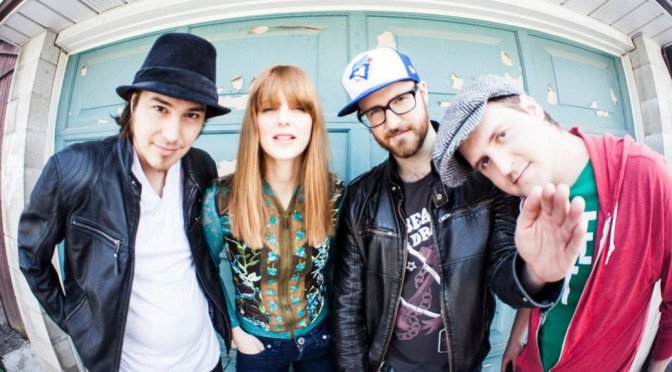 Scarlett Flynn of Running Red Lights tells her story for the first time. A story of false promises, mismanagement and the album that took 8 years to record. 8 years ago I had a solo project - Scarlett, along with an artist development deal with a prominent publishing company.

It was total hell to put it mildly. I was young and impressionable and had no control and no voice of my own.

Instead I was a vehicle for the voices of the puppeteers who ruled my every move. The company decided they wanted to put a band behind me so my manager proceeded to find me the leftover members of a disbanded group that was born out of the Canadian Idol years.
Dave Puzak (my guitar player) is the surviving member of that ensemble.
After only a few rehearsals the drummer was fired for incompetency by our music director so Dave suggested we hire his childhood best friend and old band mate, Kevin Howley (current RRL lead singer and instrumentalist extraordinaire). For a while we were developing and recording on the publishing companies dime (aka my incurring debts) but I still had very little control. I was the face and voice of the project but it all seemed very fabricated. Though I desperately wanted to get out of my deal my manager had agreed to a renewal without my knowledge and he pocketed my advance. I was being mismanaged and misinformed. Eventually I had enough. I cut my hair into a mohawk and replaced my slim dresses with t-shirts with slogans like ‘Produce‘ under pictures of bar codes. I fired my management company and I offered the band equal share of everything.
The publishing company was not happy. My manager filed suit. Life was in a tail spin. I waited out my contract in agony. In the meantime the band started working with a certain prominent producer. At first he was hired under contract with my publishing company but eventually the money ran out and he started working on spec.
Thus began 2 years of wasted time and spinning wheels. Because the producer was so high profile we were sure the ends would meet. Instead we wasted 2 years recording a 4 song EP that was total shit. Around that time we started getting romanced by a well known A&R (artists and repertoire) figurehead at Universal music. It appeared as though we were getting a deal. After all the drama and hell we had been through it felt like we were gonna make it after all. But it wasn’t to be. The company picked up another band instead and the courting abruptly stopped. We were dismissed and devastated. It was around that time our bass player quit. He was like a brother to me and that loss was a sucker punch to the stomach.
Times were really rough and I almost quit too. A few months later we found Jeff Carter (our bass player). He went to Humber with Kevin and was looking for a new gig. He was a much needed infusion of positivity. A few months later we were contacted by an engineer that worked out of a recording studio who had seen the band live and was interested in putting together some demos.
He convinced us to enter a competition called Indiscover. The winners get an opportunity to play in front of 30, 000 people and 2 million viewers on live TV during the ET Canada New Years Eve bash and would get a 2 song recording contract with a recording studio. He was sure we would win and after 4 months of online voting and 4 weeks of live performance in front of industry judges we did in fact WIN. This was a huge accomplishment as the contest had over 100 bands competing. We played the show and rubbed shoulders with some of the biggest stars in Canadian music… We got the deal and once again we seemed to be on an incline.

But once we got into the studio to record it all went to shit again.

Though the raw tracks were promising something got lost in the mix and the result was a 2 song EP that was lacklustre at best. After barely trying the company basically shelved the songs and THAT was THAT. Moving forward we started to work with a manager who found us a producer that he felt could help us solidify our sound.
Problem was the price tag. However we were determined and we thought for certain this was the guy that would bring it all together for us. So the band played every single wedding gig, corporate gig, bad cover gig we could find and came up with $25, 000 for a 5 song EP. The results were less than desirable and though the EP sonically sounded HUGE it was not a sound that we identified as our own.
Although our manager attempted to pitch it around he was getting very little interest. Eventually he lost interest as well and we were back to square one. That brings us to around this time last year. I had put together a little mini tour of Southern Ontario called the ‘Soul Spark Revival Tour’. I needed an infusion of light which I have only ever found on stage and though we really had nothing to support I just really needed to play. I was losing my heart and I was bitter and angry and confused.
It was after one of those shows that I was contacted by a fellow musician and head of marketing at a prominent indie label who had heard some music online and saw us play at one of our tour stops. He thought that we were perhaps one of the most incredible live bands he had seen and one of the most current and marketable bands he had seen.
However, he thought our recordings did not represent us AT ALL. STORY OF OUR LIVES. So with that little bit of motivation I spoke to the band and we decided that if we wanted something done right than we would have to do it ourselves. We’ve always known we had SOMETHING within us worth fighting for however we also knew that this was the last try we had in us.

8 years is a long time to go no where. We wrote Mulberry Love and it all changed. Everything clicked and then suddenly the sound we had had in our head all these years was finally reverberating back to us through the speakers of Kevin’s studio. Then we knew we were cooking with some real gas. Soon thereafter a single turned into an album. Our first and the biggest accomplishment of our careers thus far.

And there you have it.

One thought on “Running Red Lights”