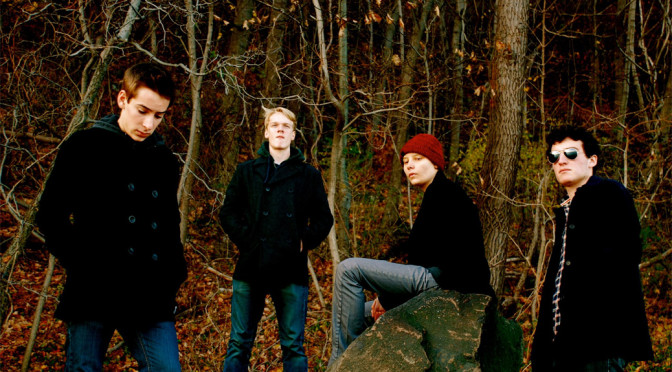 Regret the Hour is a young alternative-rock band from Nyack, New York.

In our very first exclusive interview, brothers Nate and Ben McCarthy reveal the story of this exciting new band – including their struggles, the creative process and their latest work.

Be sure to check out their upcoming album Better Days, which will be released on April 13th 1) Give a brief summary about the band members and how the band came together.

Nate: My brother and I began writing songs together in elementary school, though we didn’t really become a band until we were joined by Anders Fleming (Drums), and Jesse Yanko (Bass). From the start, we only played original material (partially because we weren’t really good enough to play other peoples’ songs).

During our sophomore year of high school, things began to pick up, and we started getting gigs at well-known New York City venues like Sullivan Hall, Kenny’s Castaways, and Arlene’s Grocery. We released our first album Disappearances (which is essentially a collection of home-recorded demos) in May of 2011.

Despite the mediocre audio quality, the album was well-recieved, particularly the song “The Runaway”, which has over 40,000 views on YouTube. In September of 2011, our bass player Jesse Yanko was diagnosed with a rare form of cancer, nonetheless, we continued writing and playing shows, and recorded a 3-song EP Another Lonely Year that November at Skyline Studios in NYC. Jesse’s cancer went into remission the following spring, and we released another EP The Living Remember in April of 2012, followed by a series of live performances.

In July, we set up a makeshift studio at an old plastic-seal factory in our hometown of Nyack, NY, and began work on our new album Better Days. With the help of producer Marek Stycos and engineer Chris Boecker, tracking for the album was finished in September.

At this point, Jesse’s cancer had come back, and two months later, just after we began mixing the album, he died. The record will be released next Saturday, April 13th. 2) How was the name Regret the Hour decided?

Ben: The name Regret the Hour comes from the french symbolist poet Guillaume Apollinaire. It was taken from the following lines:

“How slowly time passes, as a funeral passes. You will regret this hour of tears, it will leave only too soon, like all other hours”

3) I couldn’t help but notice that the band has a lot of time related names in their work. Is this intentional in any way?

Ben: I don’t know if it’s necessarily intentional, but the concept of time, and the way in which some things change over time while others stay the same, seems to be a recurrent theme in our work.

4)  What has been the biggest challenge for the band so far?

Nate: I would say the biggest challenge for us so far has been trying to pin-down our musical direction and find our collective voice as a band. Trying to emulate the work of others who have inspired us,  while still attempting to do something new, something unique, has been a big challenge for us . 1) What defines your music?

Ben: I guess I would call our music alternative-rock. There are certain bands that we’re frequently compared to: U2, Radiohead, Joy Division. I think sonically those are accurate comparisons but they make us seem fairly narrow-minded as artists. We have been influenced by so many different kinds of music. We’re huge fans of Bob Dylan and Van Morrison. Blood on the Tracks is one of the greatest albums of all time. Now sonically you might not be able to hear that influence but thematically its definitely there. As an artist, its easy to get caught in one genre and feel like you have to keep producing art that stays inside that genre. I think that is completely false–as an artist you have to keep trying to push boundaries and work outside of your genre. It keeps things interesting and fresh.

2) In what way does Regret the Hour stand out among other bands?

Nate: I think if anything makes us stand out, it’s the fact that we’re willing to do things a little differently then your average “indie-rock” group. We’re willing to push a little harder and see whats on the other side, and do so allows us to write and perform music that is interesting and different. And I think that’s what we did on the new album, Better Days.  Sometimes it simply doesn’t work out, but other times it works brilliantly and you end up with something that you never would have gotten without pushing that boundary.

3)  Tell us a bit about the creative process. Who writes the songs? Where does the inspiration come from?

Ben: The creative process for us is usually very collaborative. Someone may come up with a chord line or a riff and everyone else will fill in around that with their respective part. For the most part no one over plays or treads on anyone else and thats what makes it easy for us to write together. I don’t think any of our songs are songs that one person has completely written on their own–thats not how we write. For us, songwriting is a very collaborative process, we feed off of each other’s ideas, and I think that can be heard in the music as well.

Better Days was written and recorded during the summer of 2012. We set up a makeshift studio in an old plastic-seal factory in our hometown of Nyack, NY, where we wrote and recorded for nearly two and a half months. The album was mixed and produced by Marek Stycos, who definitely left a mark on the record in terms of production. At this point, we’re just excited to finally be releasing the album after months of work. 2) Are there any other projects are you currently working on at the moment?

Right now, we’re setting up some live shows to follow up the record release. We’ll be doing a small, intimate show at the Factory on April 13th, and a larger CD-release party at Sullivan Hall on April 27th. We would like to take a moment to thank all of our fans, both musicians and listeners alike, as well as the readers of this blog for being passionate about music. As a friend said recently, “too many people are asleep at the wheel.”

For more details about Regret The Hour, check out their official site here: www.regretthehourmusic.com

You can also connect with them through Facebook: http://www.facebook.com/regretthehour