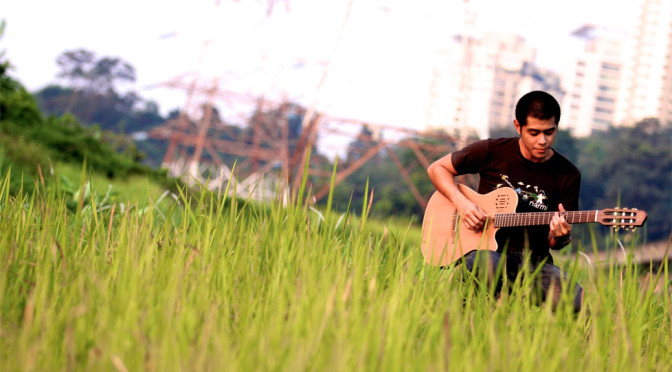 One would probably remember him as the drummer with the boyish grin from One Buck Short or even the hopeless romantic as seen on NTV7’s reality TV show “What Men Want”. Now, a multi talented singer-songwriter; Narmi speaks to Indieverse about taking his passion a notch higher. 1) From drummer to singer-songwriter. What were you hoping for when you started off?

I was hoping to explore a different side of my creativity and also probably try to reach a different fan base.

2) So when did you start to discover that you can actually sing besides drumming?

I used to go online and perform for random people, and these guys were like – You know what? You should go out and sing!. Even when I was with One Buck Short, I was already playing the guitar and singing in my bedroom. My audiences were the people who knew me – friends and my then girlfriend. But, I haven’t exactly mustered my courage to go public yet. 3) In that case, when did you tell yourself that you were going to give it a try?

There were a lot of things. At one point, One Buck Short was going slow – the bassist left and Mooky our vocalist got married. For a good one and a half years, we were out of the scene. As a drummer, I can’t do anything if there’s no band. You know, I can’t exactly go out and play drums alone. So I started playing with this band called A.P.I which is a project band and we went into AJL (Anugerah Juara Lagu) and everything. But during that time as well, I was like; let’s try this Narmi thing.

Yes. It suited me well, because people know me as Imran from One Buck Short. And when you flip it around, it’s totally different from what I have been doing. So you get – Narmi. 5) What were the challenges that you faced throughout your transition? Was it a smooth one since fans would have recognized you from One Buck Short, or was it a rocky start heading into a new direction?

It wasn’t very rocky. It was more like I needed to make sure that I was ready. The transition was pretty natural because I’ve started with putting up my videos on youtube, facebook, and a little here and there.

6) You mentioned in your album description that you were honest in your music and songwriting.  Are you reserved about writing about your personal life, or do you not mind the tell-all approach?

Mmmm, maybe I have more of a filter than Taylor Swift I guess? [laughs] Songs that I write, I try to convey how I really feel. But done in a way where everyone can accept it.

7) So what are you driven by? Money, fame or recognition?

Well I’m not into fame, but being recognized is actually a really good feeling. Money of course, because I want to do this for a living. So basically it’s a bit of both, money and recognition.

8 ) Where did the ‘backseat sessions’ idea come from?

The idea was the brainchild of the [Dream Rocketeers] management. We decided to put proper content into my new youtube channel [Narmi Adventures]. So when you look at the channel itself, think of backseat session as a series of videos. Well, we strive to make it more organized for the fans, and give it a different flavour to make it more interesting.

We get that a lot. [laughs] Most of the backseat sessions were recorded in sister’s CRV. One of the it was recorded in mine, a Honda. We usually record our backseat sessions during the weekends, where we drive on an empty carpark around Pusat Bandar Damansara. And we have to drive, very very slowly. Man, I love my coffee even though it’s bad for my vocals. Before a big show, we’ll have a huddle – which is what I really like to do and then, I’ll say a prayer before going on stage.

11) Your latest EP – Narmi Adventures. Did you personally write all your songs or were there others to co-write with you?

Songs were all written by me except for ‘Cair’. ‘Cair’ was conceptualized by me but written by a friend of mine because I couldn’t write in Malay since I went to an English school. Threw him ideas, told him how I wanted it to be like, and gave him the melody and everything. He fits in words for me in Malay. Production side, all the finer details of the album were done by my management, the Dream Rocketeers.

12) Is this album of any particular significance to you? Would you attribute it to any event that happened in your life?

Well, I consider this as my introduction to the world. While we were working on this, in my mind I have already imagined One Buck Short taking the backseat, and this would be a new beginning.

13) Your song ‘Tweet In Defiance’ was inspired by the burning of churches over the ‘Allah’ dispute back in 2010. Tell us more about it.

It started with that, because I had a girlfriend back then and it was easy for her to get me excited. Okay, that came out wrong [laughs] You know, when she was riled up about an issue and talks to me about it, I would get riled up as well. I was getting acquainted to Twitter as well and from what I observed, a lot of people tend to take their complaints on Twitter. When they can’t tell anyone about their problems, they’ll go to Twitter tell the whole world about it. I like to write songs with double meaning in it. For this song in particular, it was inspired by the whole religion dispute and also another incident where a close friend of mine betrayed me. So if you listened to the song with both ideas, you would perhaps get a better understand of it.

14) Are there any upcoming projects that you are working on? Can fans expect a new album from you sometime in the near future?

We would be releasing ‘Cair’ as my first Malay single. ‘Cair’ as heard on the EP is live, and ‘Cair’ on my new album would have more instrumentation to it. Well, fans can expect the new album to be an epic one. Our backseat session will be reaching the end of the season, so we’re working on a new backseat session series. For the upcoming series, we’re getting more systematic in terms of shots and being a little more detailed with what we put into the series to make it a more polished production. 15) As an artist today, what advice would you have given to your 16 year old self?

I’d tell myself to practice. Enroll for vocal and guitar classes cause I haven’t gone for those, ever. And I’d probably tell him to cut his hair. But that naturally happens. [laughs]

16) I assume that music probably came more naturally to you…

17) Since everyone was a startup once, any tips for aspiring bands out there looking to get gigs and airplay?

18) But don’t you lose passion for the song along the way?

It’s different. Because when you’re on stage, you think about different things. If you don’t practice enough, you’d be thinking of – I need to hit this note, where does it change? Am I doing it right? Am I singing it the right way? Are the lyrics correct? There are so many things to be worried about. So when you’re sick of practicing the song, it means that you can literally do it even with your eyes closed. That’s when you will be ready to perform.

19) Did you find being on NTV7’s What Men Want a little too intrusive? It has definitely given viewers an insight of your private life.

I think it was good that the show allowed people to see a little bit of what my life is, even with all the cameras around. But well,  I feel that it’s honest enough.

You can check out more about Narmi at these links: