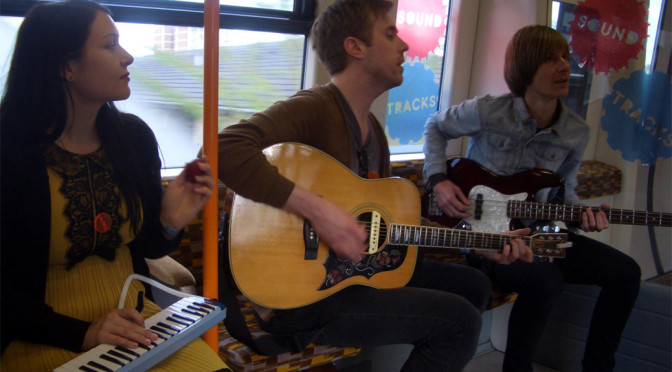 1) Tell us a bit about your musical background

I’d always been a musical child, sitting at the piano with my grandma and then working out the ‘Blackadder’ theme by ear on a Bontempi keyboard at around age 8. I drew a lot too, but this has diminished over the years and now I only focus on music, which needs to change. I first had keyboard lessons, then saxophone lessons (which didn’t last), then the guitar. I began writing songs aged 12 and they were awful, but I had big ambitions then and it was always my main focus and career aspiration. I wouldn’t have been happy to do anything else.

2) What inspires your music today? Are there any role models?

I’m currently in a classic songwriter phase, which I come back to every couple of years. Carole King, Neil Young, Graham Nash, Harry Nilsson, The Beatles. All incredibly melodic and simple, but so timeless and inspiring. My latest EP has been mostly inspired by my fiance and our engagement.

3) Apart from working on your own music, what else occupies your time?

Well I’m either co-writing with other writers for their own repertoire, or I’m doing various soundtrack or writing work for other people’s projects.

4) What would you say is your biggest struggle being a musician?

Coming to terms with what I do. Mostly everyone I know goes to work first thing and goes home at 6, and there’s a salary there. It’s taken me a long time to allow myself to work on my own songs on a weekday, for fear that it is not ‘work’, and therefore not dignified. I’m not sure whether this is something that’s conditioned in me from school, or perhaps I just care too much about what others think, but I’m always happier when I’ve created something by the end of the day, but it’s never enough.

1) How would you describe the genre of your music?

It’s been evolving over this past year as I try things and find what I’m most comfortable with, but it’s always song based  in the traditional sense. I suppose the EP I’m currently making is singer songwriter acoustic folk pop. But my last ep wasn’t.

2) What do you think makes you stand out in your genre?

It’s me! I don’t really know if I can answer that. I suppose throughout there’s my singing voice and my lyrical voice, which I imagine are developing into something recognisable and unique. 1) How is it different being a solo artist compared to being in a band?

I can move forwards quicker, it matters less what I look like or how old I am, and I’m less precious about the music because it requires less toing and froing.

2) Why did My Luminaries break up?

Because our frustrations and tensions were outweighing what we were getting out of the music and performing, myself anyway. The band was becoming a horse that needed continual resuscitation and flogging, whereas as a solo artist it’s just me, relying on my own two legs. If that makes any sense!

3) Tell us about The Great Outdoors. How is it different from the EPs you’ve released before?

The last EP I had released was My Luminaries’ first ever release, so in a way they are similar in that they are both a new start. There are 3 Great Outdoors EPs, and I’m currently recording the 3rd. It’s been a great way to work. Write some songs, put them out, don’t dwell on them, get on with the next EP and see where it takes me, and there’s definitely been a journey over the last 12 months as my confidence has increased. The vocals have become less smothered in production and more in focus. I’ve accepted that it’s ok if it’s just me. 1) What can we look forward to from Lonesound in the future?

I release The Great Outdoors (Pt 3) in the next couple of months, and fulfil my Pledge Music campaign (get CDs and merch made and sent out to those who’ve pledged on my 3 EP album). Then I plan to get my head down and really focus on writing for the rest of the year, using what I’ve learnt over the last 3 EPs. Currently I plan to write my first cohesive solo album, and am very keen to work with a producer so I can focus more on the writing. In the long term, this will continue throughout many albums. That’s the plan. I’m continually amazed at the support of my fans and those who’ve pledged their hard earned money on my album. To new readers, please take a moment to check out what I do. I can’t ask for more than that.

For updates on Lonesound, you can check out his official site here: http://lonesound.com/

You can also connect to him through Facebook http://www.facebook.com/lonesound