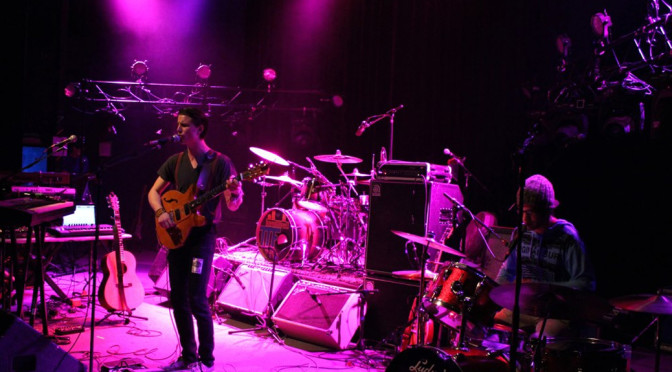 1) When and how did you first get interested in music? How long have you been playing?

My dad is a guitarist and singer and big time music aficionado. He started me playing bass when I was a little kid. So I have been playing my whole life …. picked up guitar in jr. high and played drums in band through my entire schooling career. I began songwriting in high school and started playing piano in the last 6 months.

2) What would you say has influenced your music the most?

My songwriting is most influenced by the music I listen to … some of my all time favorites are Coldplay, Radiohead, Muse, Sigur Ros, Death Cab for Cutie, The Red Hot Chili Peppers, and The Killers. Vocally I am very much influenced by my heroes … Jeff Buckley, Thom Yorke, and Jonsi.

I graduated last spring first in my class with a degree in electrical engineering from University of Colorado at Boulder but as of now I am not doing anything related to my degree! I am 100% focused and dedicated to my music. As far as hobbies, I am a Telemark skier, amateur rock climber, and music junkie! I also LOVE social media and am very active on Facebook, Twitter, Instagram, YouTube, and Tumblr! So make sure to connect with me @jakeonealmusic

4) Where have you performed? Which performance is your favorite so far?

I have performed my music all over Colorado and on the streets of many Europeans cities. On Bastille Day in Paris last summer I was busking by the Sacre Couer and it ended up turning into a massive jam with 10 other musicians at an outdoor cafe. Most money I’ve ever made playing on the streets! My favorite performance was definitely this last weekend with my primary project Summa at The Fox Theatre in Boulder, CO. I’ve been going to this theatre since I was 12 years old and it was truly a dream come true for me to take the stage there where practically all of my favorites have performed at some point or another! 1) How would you describe the genre of your music? What made you decide to play that kind of music?

My music can most easily be classified as alternative rock. It wasn’t a conscious decision to play this type of music … but that’s just the songs that come out when I start writing. I think that’s how it goes for most songwriters!

2) And how does the way you play make you unique in your genre?

I think Summa is a very unique act because we are a duo of multi-instrumentalists but still have a big sound. Max and I both switch between guitar, bass, drums, and piano so it keeps the sound fresh and interesting song to song. Ultimately, though, I would say the songwriting is what sets us apart. We put a tremendous amount of care and thought into our songs from a musical and lyrical standpoint.

3) Why do you use a sigma as your band logo?

It’s the reduced version of our longer logo … which is a convolution formula:

J for Jake and M for Max … convolution is used in tons of fields but I’m most familiar using it with Digital Signal Processing… read about it on wiki. But basically it’s combining two functions to form a new one.

1. the cohesion of distinct bases of knowledge into a comprehensive whole

1) What inspired this song? And what does it mean to you?

Microlove is a song about myself but was inspired by my parents. I grew up on a corn farm in a tiny town called Holyoke, CO and was back for corn harvest this last fall. While driving the tractor all day I was wondering what I’m gonna do if my music career falls flat and was contemplating the idea of moving home to farm corn. It made me think about my Dad getting my Mom (a city girl) to drastically change to a rural lifestyle way back when ….. in the song I’m talking to my girlfriend and telling her I may move back to farm corn but she doesn’t need to come if living in a small farm-town isn’t her destiny. But obviously I want her to come!

1) Where can my readers find more info about you and hear more of your music?

One thought on “Jake O’Neal”