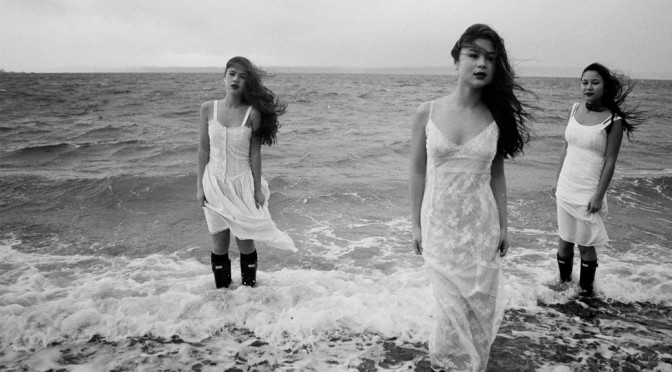 I’m really excited to feature this band here on IndieVerse. They’ve just released their debut album Lost Parade in April (2014) and are already that much closer to greatness. Here is Tigerlily Nakagawa Cooley, representing Bleachbear.

Introduce yourselves to our readers. Tell us about Bleachbear.

Hi, we’re Bleachbear! We are an all-girl family band from Seattle, Washington comprised of me – 16-year-old Tigerlily Cooley on vocals and guitar, my 14-year-old sister Annabella Bird Cooley on drums, and our 14-year-old cousin, Emiko Nakagawa Gantt, on bass. Our music is a fusion of distortion and layered harmonies, flipping between dreamy pop-rock and northwest indie folk reminiscent of the Dum Dum Girls mixed with The Head and The Heart. We have been a band for two years and in that time we’ve had a lot of cool opportunities to play shows around Seattle including opening up the EMP’s Women Who Rock Concert, having two of our songs made into music videos by Reel Grrls, and a documentary filmed of us by Art Zone with Nancy Guppy. We also just released our debut album, Lost Parade. Besides the band though we’re just typical teen girls trying to fit in homework, sports, friends, and the music we love to create!

The name Bleachbear makes me think of a Polar bear. How close to the truth am I?

Not too close, haha. We came up with the name Bleachbear as a reference to two music genres that we grew up on and that inspire our music: “Bleach” is a reference to Nirvana’s album Bleach and the ‘90’s grunge scene here in Seattle, and “bear” is a reference to the folk scene in the Pacific Northwest and our love of the outdoors. Also, you wouldn’t believe how many weird band names have already been taken; Google about anything and it’s already someone’s band name, song, or album but Bleachbear was still available!

So, your debut album Lost Parade is now out on Bandcamp. What would you say to someone who hasn’t heard it yet?

Really the album came about in a funny way since our initial intention wasn’t to record an “album” at all. We just wanted a few songs to give to family and friends and extra copies to bring to shows. One day my uncle stopped by and told us he had reserved time in the recording studio over the next couple days. At first we were worried since there was no time to practice, but he said it wasn’t about perfection but about being true to where we are as 13 and 15 year old musicians. So we headed into the studio and managed to get through more songs than expected – enough for an album. And once we listened we thought, “Hey – this is pretty good!” and decided to self-release it.

We’re excited the response to the album has been very positive. The Seattle Weekly reviewed Lost Parade writing: “Within its eight songs, singer/songwriter Tigerlily turns the poignancy of being 15 into something productive, progressing along a narrative arc that tackles everything from unrequited love to lost love… What Lost Parade succeeds at best is creating a mood—one that takes the listener back to a time of butterflies, first kisses, and note-passing.” And Marco Collins an influential radio personality who heard our music by chance wrote, “MY GOD! That voice. Do yourself a favor, press play on the band’s new record, Lost Parade and become enchanted.”

What influences your songwriting? Walk us through your creative process.

I’m pretty sure this is an overused cliché, but I really let the songs come to me. I never sit down thinking, “I want to write a song about this or that” so I suppose my songs are simply a reflection of what’s going through my head at the time. I usually start by strumming a chord progression and finding chords that sound good together. A phrase or words will come into my head at certain points, and from there I fill in my lyrics around those words. I’m not one to “force” songs, so if I’m having to strain to make the chords fit together or find the right words I’ll drop the song since the songs I ultimately like best are the ones that came most easily to me.

As far as influences, I get inspiration from a lot of weird sources. I used to write a lot of songs inspired by ghost stories and that sort of thing until my sister and cousin complained all the songs were depressing so I started tricking them by writing cheerful melodies with sad lyrics which you’ll notice if you look at the songs on our album. All my songs have a story, emotion, or meaning to me. What other projects are you working on at the moment? And how do you divide your time between them?

I am involved with a few other musical projects including another band, Eleven07, in which I play bass, sing, and contribute to song-writing. I also occasionally sing on other bands’ albums as a guest singer, and this summer I plan to collaborate with some other musicians including rappers so will try out that genre! But aside from music, all three of us play multiple sports, and are in the top academic programs in Seattle. Maintaining straight A’s, playing sports, practicing music 4-5 times a week, and playing shows can sometimes feel overwhelming. The key to dividing up our time has been knowing how to prioritize, staying organized and cutting out unnecessary things like watching TV!

Where do you see Bleachbear in the next five years? How do you see yourselves developing as musicians?

Well I’d say we’re pretty ambitious. We have about 30 more songs that we play live and would like to record. And we want to tour! We are still young so there is a lot of room for development. Ultimately, we simply want grow into the very best musicians that we can be, and to still love music as much in five years as we do now! Any final words to your fans and readers of this blog?

Definitely check out our album Lost Parade which is on Bandcamp, iTunes, Amazon and other online stores. And if you enjoy the album, tell your friends! Oh, and go “like” us on Facebook!!!