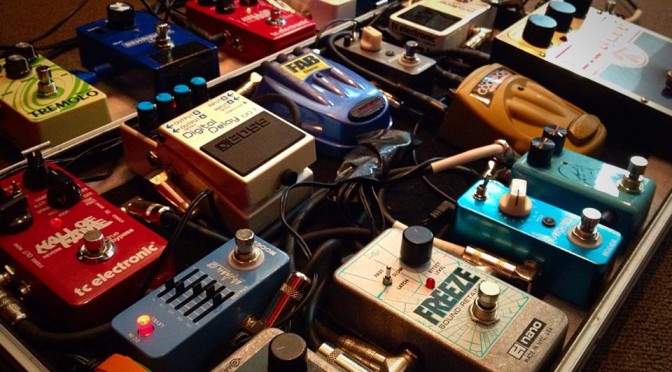 We are Bloodhounds On My Trail from Melbourne Australia. Born out of the music scene here and hoping to add to it. Johnny has vocal duties along with guitar, Chris on bass, Nik on drums & Chris (aka Donnie) on guitar.

In your own words, what is shoegaze? How does it stand apart from other music genres?

To me it’s going deaf to beautiful music. To a friend of mind it is “It’s good stretching music”. I think that is complementary.. Something to take you away.  It stands out because of the meticulous care given to the sonic sound of the band playing. Listening to it can take you on a journey. A good way to take you mind off of what it is you’re doing. I also think there is this bond with it. Cause it’s perhaps a niche genre, there is an element to it that when you are listening away you are somehow connecting with others who are into it for the same reasons you love it.

What are some of the different sub-genres of shoegaze?

Roogaze my friends… Get on that. Coined by a great Melbourne shoegaze band Lowtide, it covers all the shoegaze coming out of Australia at the moment. I could probably just list of some usual suspects like noise rock, space rock etc but I think most bands would like to think that they are a mix of a few things and therefore some kind of their own genre. Some bands are out and out shoegaze, but best ones of recent times are where shoegaze is a element (probably an obvious one) but they blend it with other things well. So in a way each band has is own sub-genre. What is the Aussie shoegaze scene like? Who are your inspirations?

Fantastic. Really there are too many good bands doing many great things & I reckon we all inspire each other in a good way. Honestly I could list 20 awesome bands and many of them friends but I’m gonna go with the last bands we played with from Melbourne & Sydney shows who are awesome – Parading, Seasloth, Lapse, Sounds Like Sunset.

In your opinion, how do you see shoegaze evolving in the future? Or will it always be a throwback to the retro 90s?

I don’t really believe that anything is a throwback to anything. Bands get influenced, bands write songs based on their influences & to me it comes out a little different each time depending on the year, era or bands style & other influences outside of shoegaze. The only real difference is that shoegazers tend to be more upfront of bands they like and have this community not many others have.
I guess maybe sometimes guitarists can get too caught up in replication of sounds rather than trying to go in a new direction which can draw the “they sound like X or Y or Z” criticism but if you have a deeper understanding I think there are different subtleties with mostly anyone. Still though like any music, there cant just be a “sound”. Good songs still need to be written & constructed well. Here in lies the difference between a good shoegaze band and an average one.

-Chris Donnie, Bloodhounds On My Trail